The Gaelic Football Rule Changes which come into effect on 1 January 2020 are as follows:

Players who take a ‘mark’ or clean possession inside the oppositions 45 will be rewarded with a free kick. Players can choose to play on or signal to the referee that they wish to take the free instead. This can be brought back to the 13m line for balls caught between there and the end line. The proposal, which was trialled in the 2019 League. 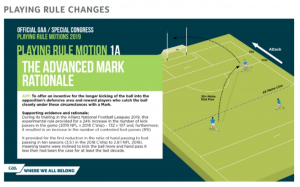 If a player gets a black card, they will spend 10 minutes off the field. No substitute allowed, reducing his side’s numbers for that period. A second black card, or a black following a yellow, will result in a red card. The player will be sent off for the rest of the match. 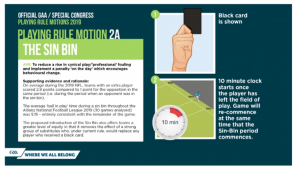 To try and avoid all the short kick-outs. All kick-outs must now be taken from the 20-metre line rather than the current mark of the 13m line. The ball must travel forward, and all players must be at least 13m away and outside the D and 20m line when the kick is taken. 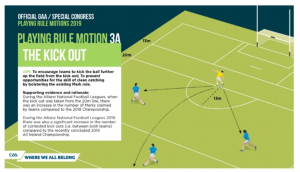 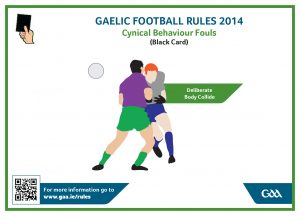 (ii) ‘to deliberately trip an opponent’

(iii) ‘to deliberately pull down an opponent’ 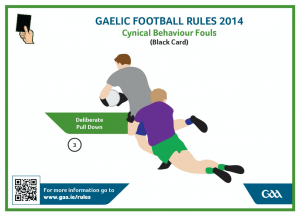 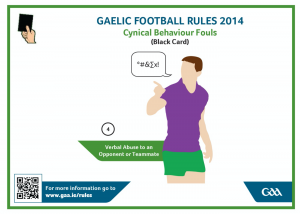 (v) ‘to remonstrate in an aggressive manner with a match official’ 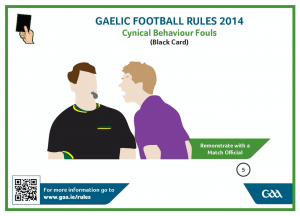 The penalty for the above fouls is: 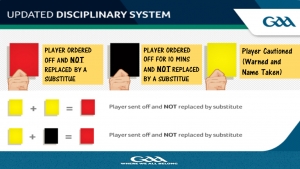 Under the ‘Black Card’ system, a player who issued with 3 black cards is subsequently banned from playing his next game.

The Playing Rules of Hurling and Football are both contained in this booklet:

The Playing Rules of Ladies Football are both contained in this booklet:

Fair Play deals with The Play, Set Play and The Scores, while Foul Play is concerned with Technical Fouls, Aggressive Fouls and Dissent.