On a beautiful autumnal afternoon in Dunshaughlin, our Minors boys hosted the Division 2 semi-final against Navan O’ Mahony’s and served up one of their best team performances. This was a very determined performance featuring a high work rate from the whole team. Dunshaughlin scored 6-5 from play with clinical finishing and some wonderful passages of team football.

Dunshaughlin played with the wind advantage in the first half but it was O’ Mahony’s who scored first with Shane McCarty shooting to the net with less than a minute gone. That was as good as it was going to get for the Navan boys as they failed to score from play for the rest of the game.

That early scare was soon forgotten as Dunshaughlin knocked in 2 goals and a point in the following five minutes and led 2-1 to 1-0. The scores came from a John McDonagh free, followed by a rasping Ruairi Kinsella goal, followed quickly by a beautiful McDonagh goal. They were the early warning signs that the Dunshaughlin forwards with their fast movement and skilful finishing were going to give O’ Mahony’s a torrid time. From there to the finish Dunshaughlin dominated the game with midfielder Ciaran McCarrick winning five Navan kick outs in the first half ensuring the ball was going back in as quick as it was been kicked out. The majority of ball that did go up to the Dunshaughlin end of the pitch was been cut out with great determination, in particular by Colm Keane & James Traynor. Calum Deehan was doing a good marking job on McCarty and McCarrick’s younger brother Donagh was inspiring in the corner back position. For the last 29 minutes of the first half with the Dunshaughlin defence working so hard, O’ Mahony’s only managed to score three pointed frees from McCarty. Jeff Wall was winning quite a lot of Dunshaughlin’s kickouts and setting up attacks.

While the other end of the field Dunshaughlin scored from every shot on goal in the first half bar one which dropped short into Navan goalie Niall Devlin’s hands. In the 12th minute McDonagh pointed from a free again and a minute later he scored the point of the match, a fantastic long range point from play. From the resultant kickout won by Ciaran McCarrick , Aaron Murphy scored the first of his 2 goals. Thirteen minutes gone and the score read 3-3 to 1-1.

Murphy followed up with another point from play and before half time Cillian McCool scored a well taken goal when one on one with Devlin and with defenders bearing down on him.

Murphy and Kinsella both scored points from play early in the 2nd half and Murphy put the game beyond doubt with another well taken goal, which was followed by another wonderful team goal palmed to the net by Ciaran McCarrick. Colm Keane closed the scoring for Dunshaughlin with a point from play, it was a just reward for Colm who was winning his duel against another of the O’ Mahony’s strong forwards Hugo Fitzherbert. The only scores O’ Mahony’s got in the 2nd half were 2 pointed frees from McCarty in the 12th & 30th minutes. Jack Nestor in goals was outstanding not only with saves but also with kick-out accuracy. Conor Gray was also at his best again today with magnificent fielding and smart passes. Dunshaughlin captain and full forward Daragh Byrne can be happy with his own performance and that of his troops. The subs who came on all played well and Moustafa Saodan got his first mark.

A lot of aspects of this performance for the management to be happy with and the boys to be proud of but still work to be done ahead of the final against Dunboyne and they know a serious effort will now be required if they are going to compete with Dunboyne.

Management will also be hoping some of the injured players on the bench today will be available for the final, Jared Rushe, Fursey Blake, Charlie O’ Connor, Liam O’ Connor, Shane Kennedy & Cian McLoughlin.

It was a tough few months for the Navan O’ Mahony’s players losing their teammate Michael Leddy and it was great to see such a large panel of players travel to Dunshaughlin and play in memory of Mikey, so close to the time of losing Mikey. Although we won today we know there will be many great games between these two teams in the future. 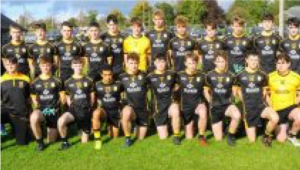